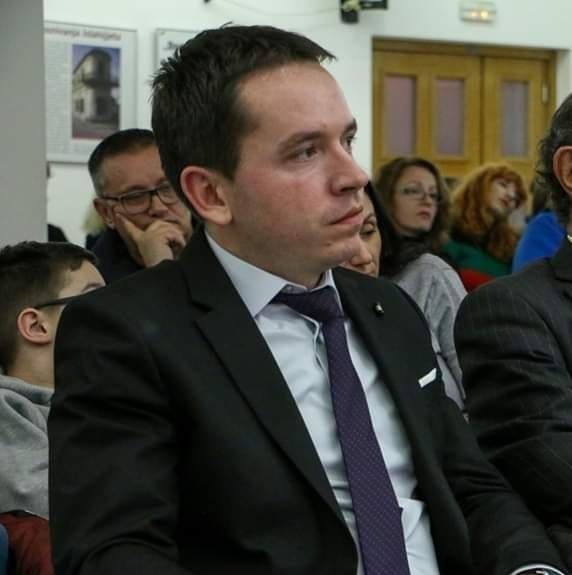 Jasmin Hasić, was born in Tuzla, where he finished elementary and secondary music school. In the Secondary Music School, he graduated on the course with the performance of Ceremony of Carlos, Benjamin Britten, and under the mentorship of prof. Dr. Čestimir Mirko Dušek. Upon completion of the Secondary Music School, he enrolled at the Music Academy in Sarajevo at the Department of Music Theory and Pedagogy, where he graduated in 2008 with the highest grade. At the end of the study, defending her graduate work at the Department of Music Theory and Pedagogy in July 2008, Jasmin Hasić is taking the entrance examination at the Department for conducting and continuing a regular study at the oldest higher education institution for music in Bosnia. The conducting studies are in class red.prof. spec. Rešad Arnautović where he graduated in July 2012 with the highest grade and exceptionally high average grades at numerous concerts, and in the same year he enrolled in postgraduate studies in the same department. In June 2014, Jasmin completed his master's studies at the Art Department for conducting a gala concert with a major orchestra and choir of the Academy of Music in Sarajevo, and attained the title of Master of Music in the field of conducting. He was awarded with a special award from the University of Sarajevo, "Silver Badge of the University" as one of the best students of the Academy of Music Sarajevo. In September 2008 he started working at the Music School Tuzla and in 2009 co-founder of the university mixed choir "Zvonko Cerić", with whom he performs at numerous concerts in the city and the country, rises. It is important to note that in one moment the choir counted over 100 performers of chorus music lovers. On the repertoire of this choir, Mokranjac's handwriting, Mendleshon's compositions for the female choir, compositions by Bosnian-Herzegovinian authors and many other multicultural works can be found. That same year, maestro Hasić moved to the position of the accompanist at the Brčko Music School, where he took the position of director of this highly respected Music school in the region since March 2019. With a group of people in May 2012, Jasmin founded the City Art Society "Lege Artis" and was elected as his president and conductor of the then-formed Mixed Choir "Lege Artis". Today, the City Artistic Association has 80 active members through the ensemble Mixed choir "Lege Artis". In the 7 years of "Mixed Choir" "Lege Artis", maestro Jasmin Hasić performed more than 350 times in the City of Tuzla outside of him. A re-appearance at the Baščaršija Nights 2012, a performance on the occasion of important dates for the cities of Tuzla and Brčko, must be emphasized. Conductor Jasmin managed to achieve cooperation with many ensembles and artists throughout BiH, so cooperation with orchestras was established BellArte Chamber Orchestra Symphony Orchestra, Zenica Symphony Orchestra, Gaudeamus Women's Choir Sarajevo, Women's Choir GKUDa Brčko, First Singing Society "Izvornik" and others, and artists such as conductors order. prof. Rešad Arnautović, red. prof. Ognjen Bomostar, maestro Djordje Stankovic, conductor David Means (USA) and many others. With choruses and orchestras, Maestro Hasić successfully performed numerous works such as Vivaldi's oratory Glloria, Beatus Vir, Josip Slavenski, Symphony of Orient, Mokranjac's Handbook II, IV, IX, XII and numerous works of spiritual music by Yugoslav authors. With the mixed choir Lege Artis maestro Hasić won the 9th international awards (Serbia, Bosnia and Herzegovina, Croatia, Macedonia (with a very serious chorus reporter, and ultimately performances were rated very high by artists and conductors who sat as jury members Maestro Hasić is the creator and art director of the International Choir Championship "Lege Artis", which is held every year in June in the City of Tuzla, where it gathers renowned choral ensembles from the region and Europe.