At the 1st session of the Organizing Committee of the International Choir Championship “Lega Artis” Tuzla 2019, held today in Tuzla, the festival’s term was established and activities have been presented since the end of this year’s Championship.

This representative Choir Championship, which has hosted thousands of choir singers in Tuzla in the past three years, will be the hub of prominent experts from all over Europe next year.

The jury of the championship has already been formed, which will be very eminent experts in the coming years. The news is that David Means from the United States (Dean of the Choir Studies at the University of Texas at the Rio Grande Valley in Edinburgh) and Ludo Claesen (professor at the Academy of Music Directing at Mastricht) are coming to the jury this year, along with Jasenka Ostojić (professor at the Zagreb Academy of Music) and Đorđe Stanković (head of the Choir Opera in Belgrade) from Serbia, to evaluate the ensembles from several European countries. 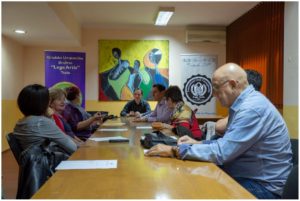 For the next Champinship have already expressed the interest of the ensembles from Czech Republic, Hungary, Poland and several countries in the region, and the organizers are rightly awaited by a great number of singers who visit the Tuzla tourist attractions during the three days of the festival and attend the festival. Therefore, with all musical qualities, this championship can be classified as a manifestation that significantly promotes the tourist potentials of Tuzla and Tuzla Canton.

In addition to the competition section, at the 4th International Choir Championship “Lege Artis”, the ensembles will have the chance to perform both at the concert of the spiritual music as well as on the city squares within OpenAir performances. In the framework of the event for all conductors and choir singers will be held free workshops with the members of the jury: prof. David Means (USA) and prof. Ludo Cleasen (Belgium).